The manufacture of surgical instruments was primarily left to tradesmen prior to the eighteenth century.  Armourers, blacksmiths, and cutlers made instruments that were used for crude surgery, and later, silversmiths were responsible for finer work.  A dramatic increase in the complexity of surgical procedures occurred in the nineteenth century as the development of technology provided physicians with a new class of therapeutic instrumentation. 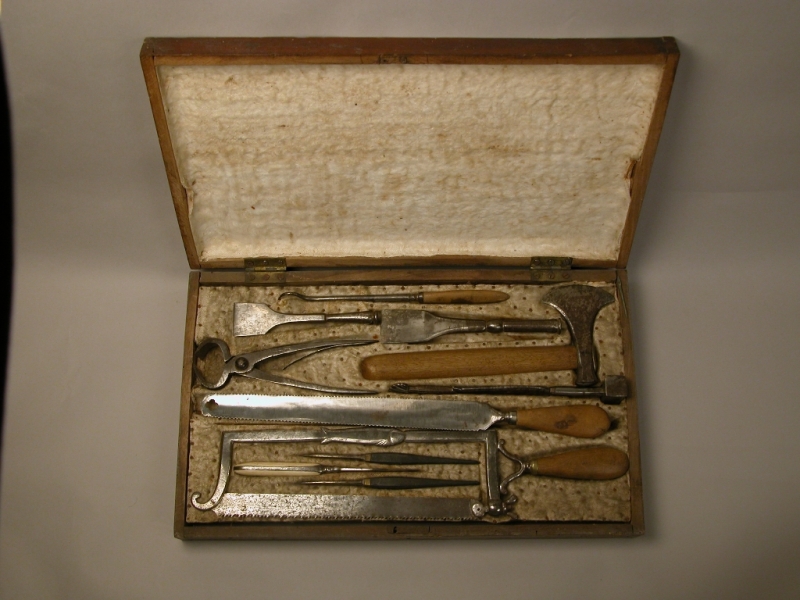 cased set by Pietro Fugini (ca. 1650)
This Italian amputation set is one of the earliest to survive with digital amputation forceps and chisels not found in sets after 1700.
, 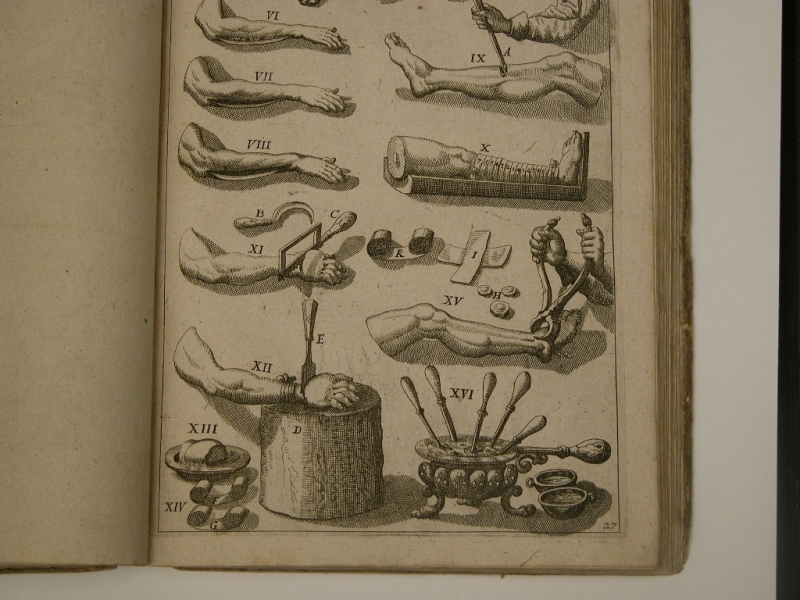 Armamenterium Chirurgicum (1655) by J. Scultetus
Use of the early amputation hammer and chisel is illustrated in this classic text.
, 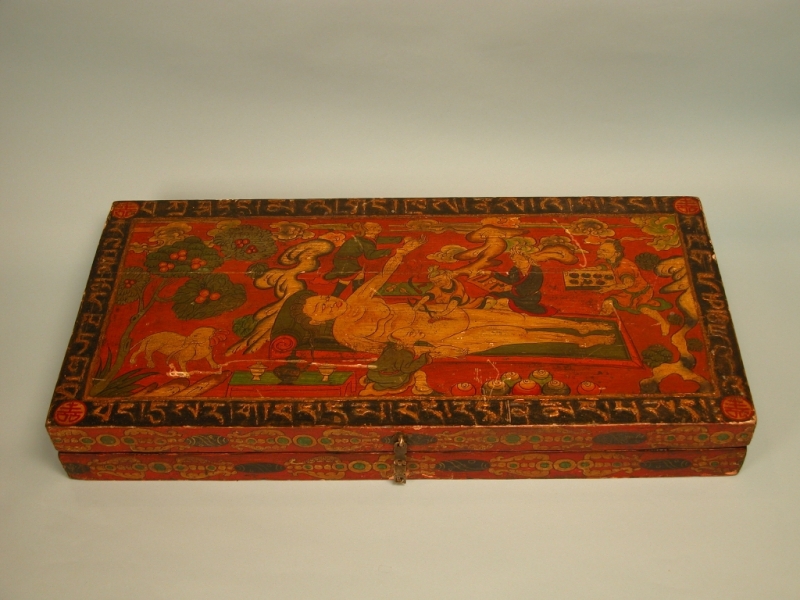 Tibetan surgical set, closed (late nineteenth century?)
Oriental surgical sets are quite rare and contained instruments that were not found in those made in Europe. Note the importance of pulse examination appreciated by all Asian physicians.
, 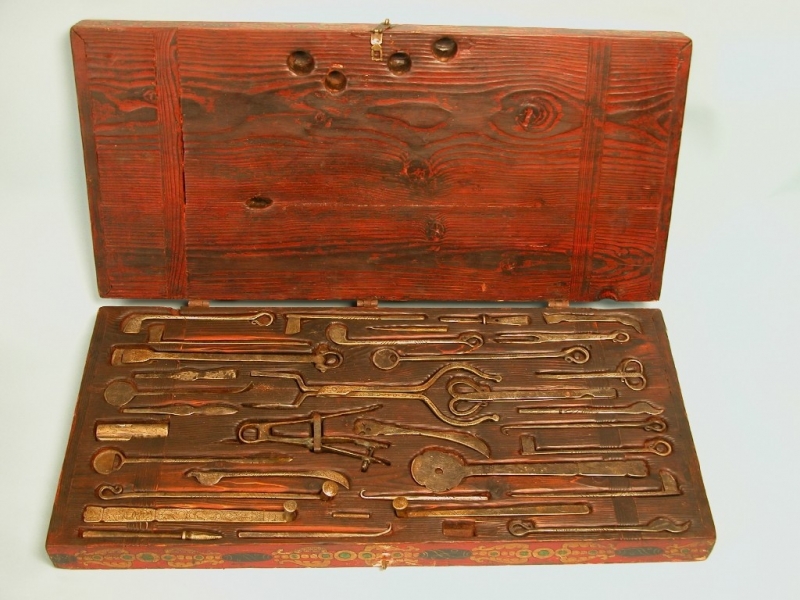 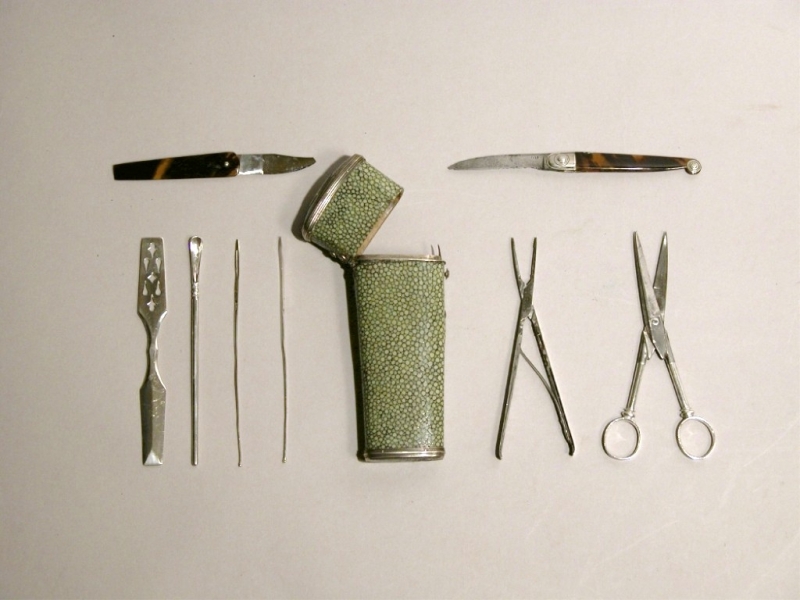 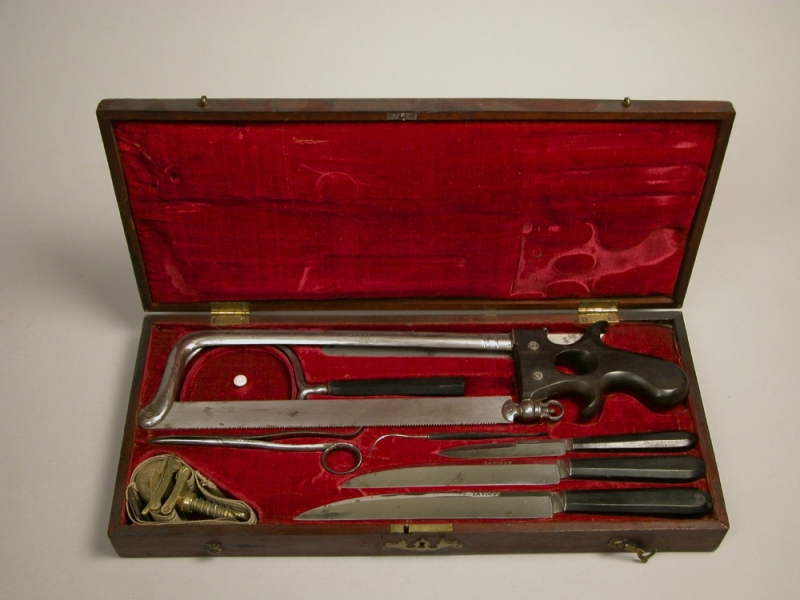 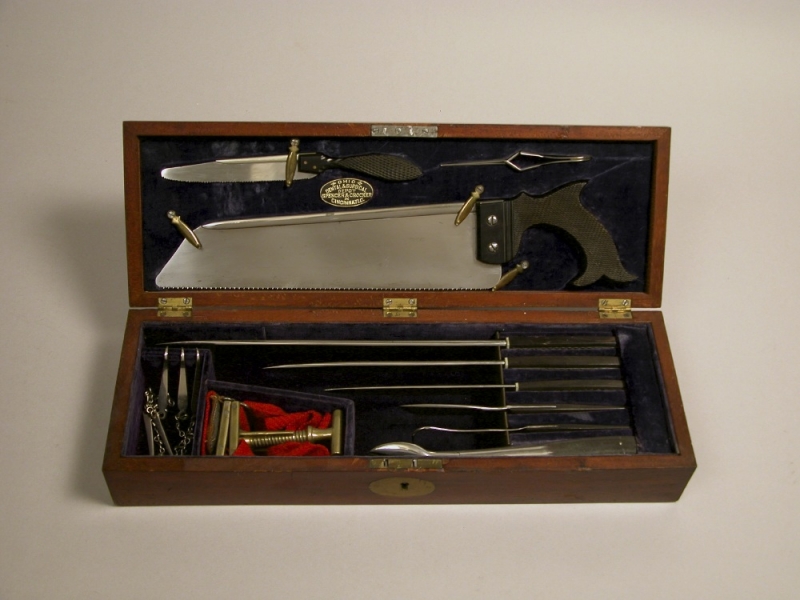 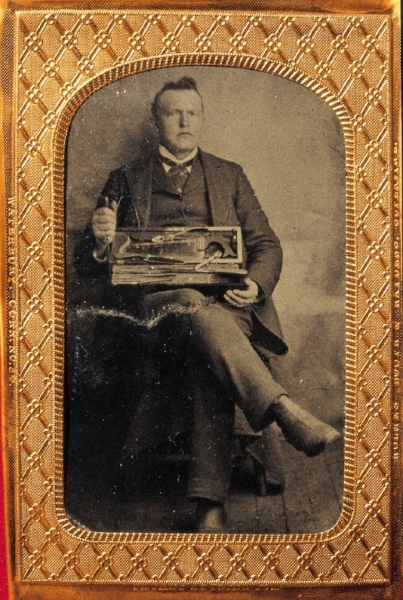 daguerreotype of a surgeon with his instruments (ca. 1860)
Surgeons were proud of their cased sets and regarded them as a status symbol. They displayed intricately carved ebony and ivory handled instruments (which could not be adequately sterilized) to their patients long after the principles of asepsis had been well established.
, 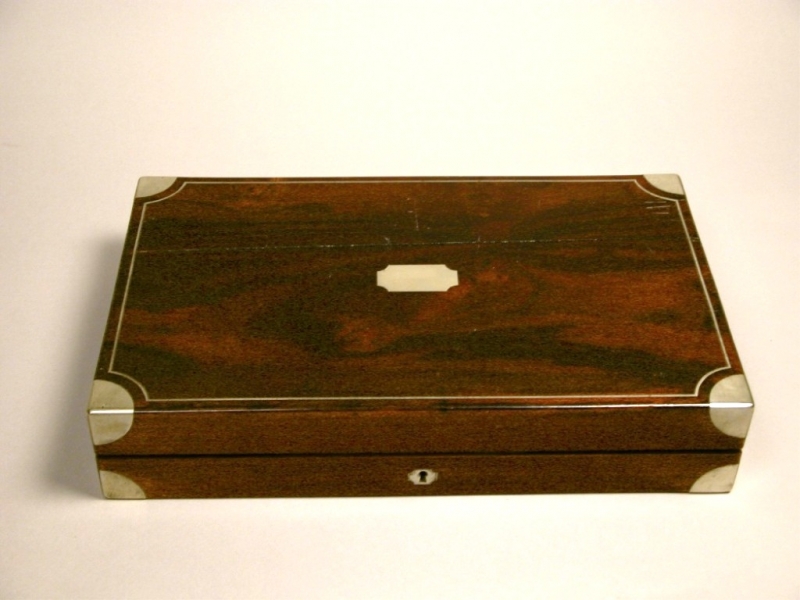 exhibition ivory general surgery set, closed (ca. 1880) by A. Aubry
Aubry was one of the finest French instrument makers of the nineteenth century. This set likely was manufactured only for exhibition and competition at a World's Fair. It contained the finest instruments made of ivory, plated gold, and blued steel.
, 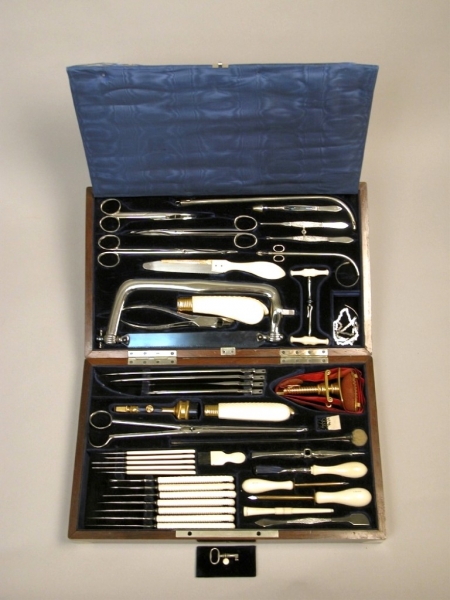 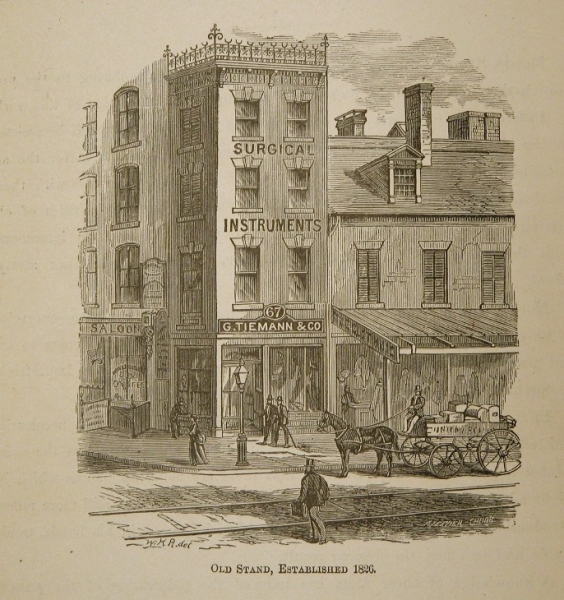 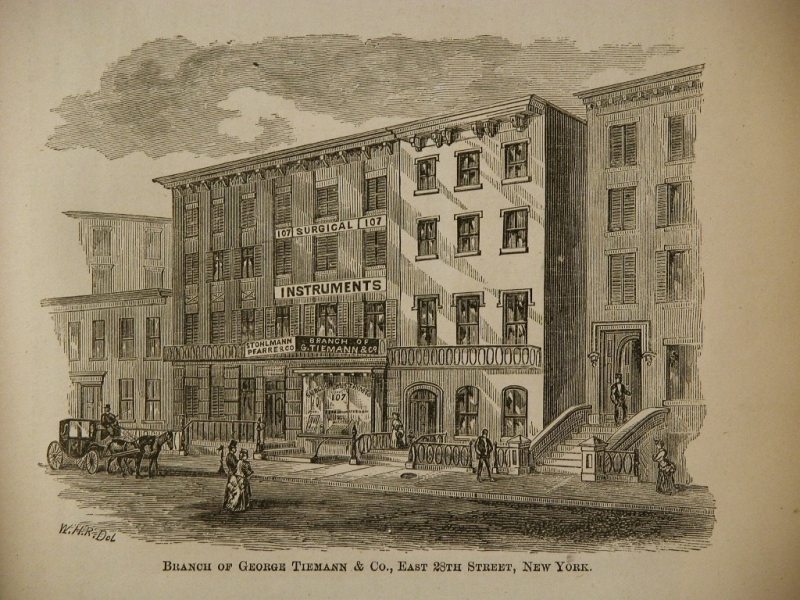 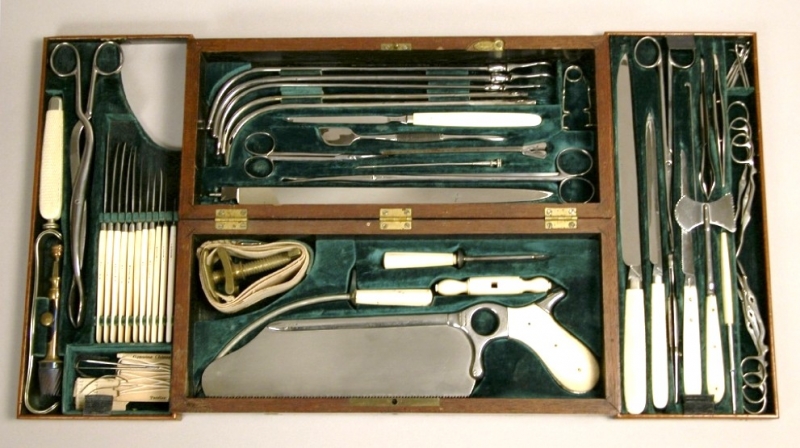 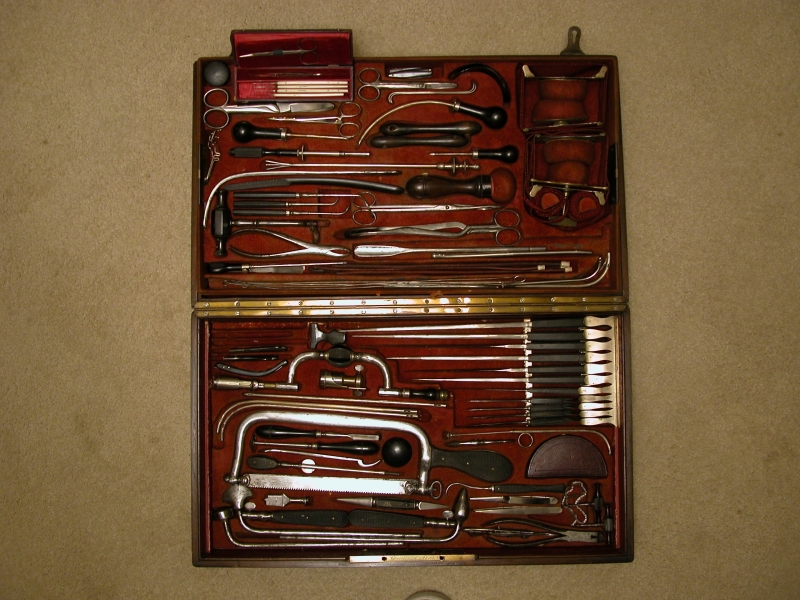 Charriere Marine Set
This is a large marine set that is fairly complete (surgery, urology, dentistry) as required for the demands of an ocean voyage. Ironically this marine set was paid for in New Orleans just before hurricane Katrina hit and it was months before it was clear that it had survived the storm.
, 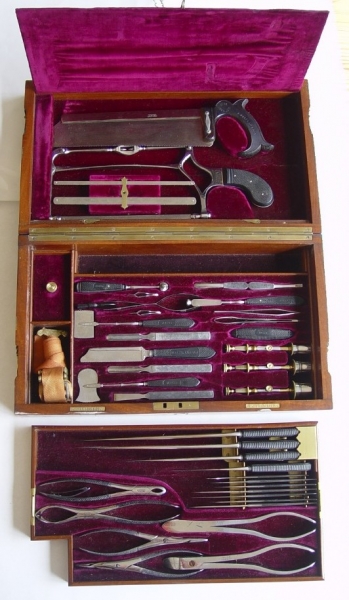 Excision Set by John Weiss & Son
During the Civil War, surgeons devised an excision procedure to reduce the number of amputations. The surgeon would simply remove the elbow joint rather than the entire upper extremity. The "Butcher's Saw" (invented by Dr. Butcher) was unique to this procedure.
, 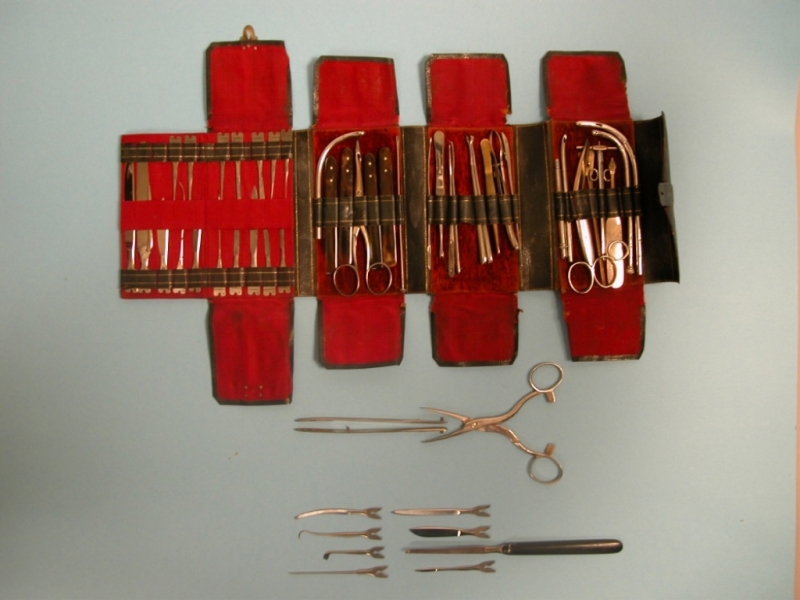 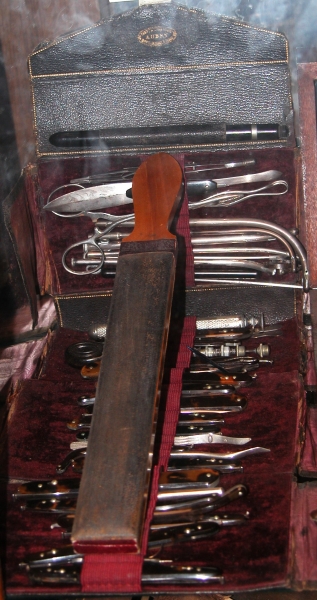 large folding surgery set by Aubry with strop
This is another large nineteenth century folding surgical set, this one one by one of the premier French makers, Aubry. There are numerous folding lancets and a strop to sharped the blades.
, 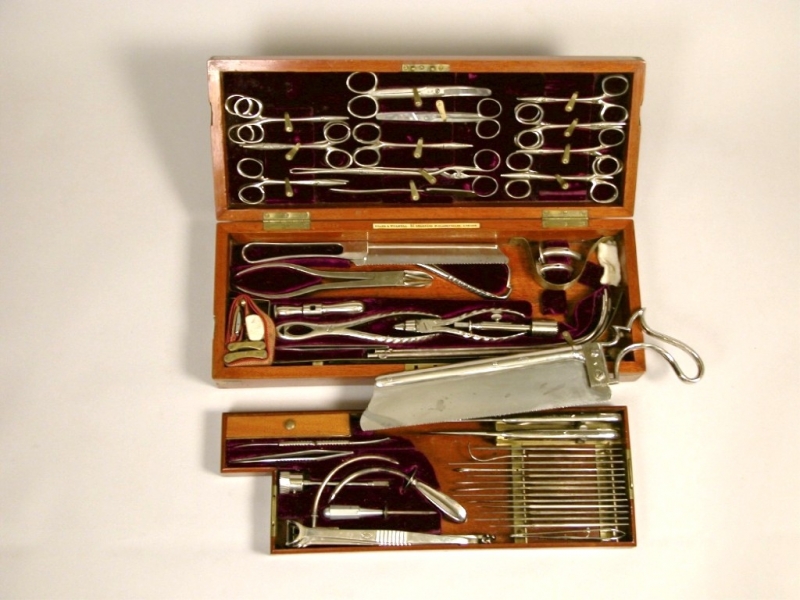 all-metal general operating set (ca. 1900) by Evans & Wormull
Physicians began to appreciate the concept of asepsis at the turn of the century and this was reflected by the transition to all-metal instruments that could be easily steralized.
, 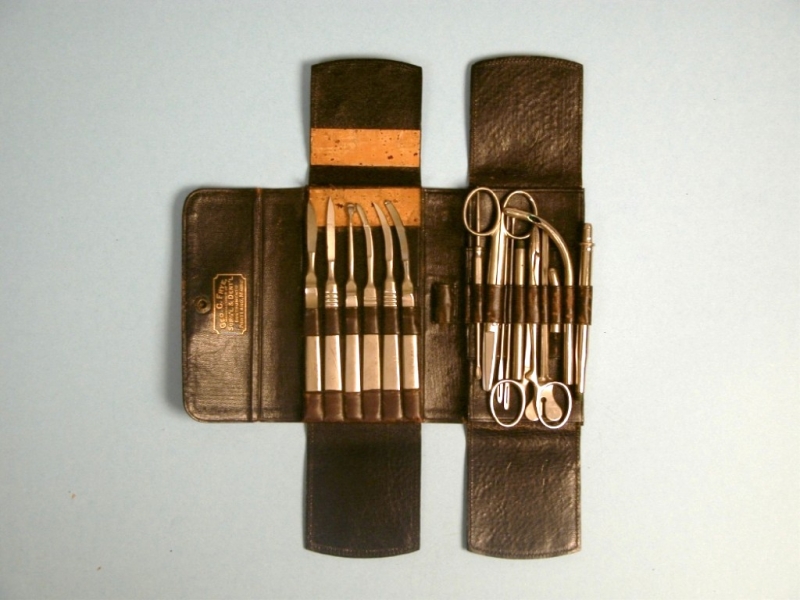