Civil War Medicine and the Battle of Cold Harbor

Civil War Medicine and the Battle of Cold Harbor

The Civil War was a seminal event in American history as combatants decided whether or not the United States would ultimately become a great nation. The death and destruction was horrific, a large part of the problem being that very few physicians had any surgical training at the beginning of the war. The Union had only 30 surgeons and 83 assistant surgeons, and when the war started, 3 surgeons and 21 assistants resigned to join the South. Carte-de-visite (CDV) of a Union formal dress (ca. 1865)
This is the typical dress of a Union Civil War surgeon.
, A Morning's Work
This is a Civil War albumin print (CDV) named by Reed Brockway Bontecou, MD, surgeon in charge of the Harewood United States Army General Hospital in Washington, DC. It represents the massive trauma that attended many ferocious battles that took place during the Civil War.
, Private John D. Parmenter, 67th Pennsylvania Volunteers prior to an amputation of his gangrenous left foot on June 21, 1865
This and the following CDV clearly demonstrate the traumatic circumstanes endured by soldiers undergoing amputation during the Civil War.
, Private Parmenter after his surgery
, amputation performed by Dr. James Calhoon on Maj. Gen. Daniel Sickles in Camp Letterman, Gettysburg, July 2, 1863
General Sickles presented his amputated leg to the newly established Army Medical Museum in Washington, DC, where he later visited it and where it now resides.
, Major General Daniel Sickles after his amputation
Before the war on February 27, 1859, Sickles had shot and killed the son of Francis Scott Key, Philip Barton Key, because Key had been having an affair with his wife. Sickles pleaded temporary insanity. He was the first person to successfully use that defense for murder in a US court. Sickles was later appointed general in the Union Army.
, CDV of Private L. Coombs, 4th US Infantry seated with his prosthesis (ca. 1865)
Seventy-five percent of all operations in the Civil War were amputations as surgeons soon discovered that the quick removal of a traumatized limb was the most effective way to save lives. Civil War survivors with limb prostheses became a common sight throughout the latter part of the nineteenth century.
, Bone-excision procedure performed on Pvt. Porubsky from the Reed Bontecou Civil War surgical album (ca. 1865)
An excision was a specialized procedure employed during the Civil War in order to save limbs by removing only affected joints or parts of bone, thereby avoiding amputation to retain at least some function.
, an excision performed on Capt. Tracey
Capt. Tracey was wounded at Chancellorsville, May 2, 1863 by musket-ball to the right humerus. Surgeon HE Goodman excised the joint, removing 4 1/2 inches.
, 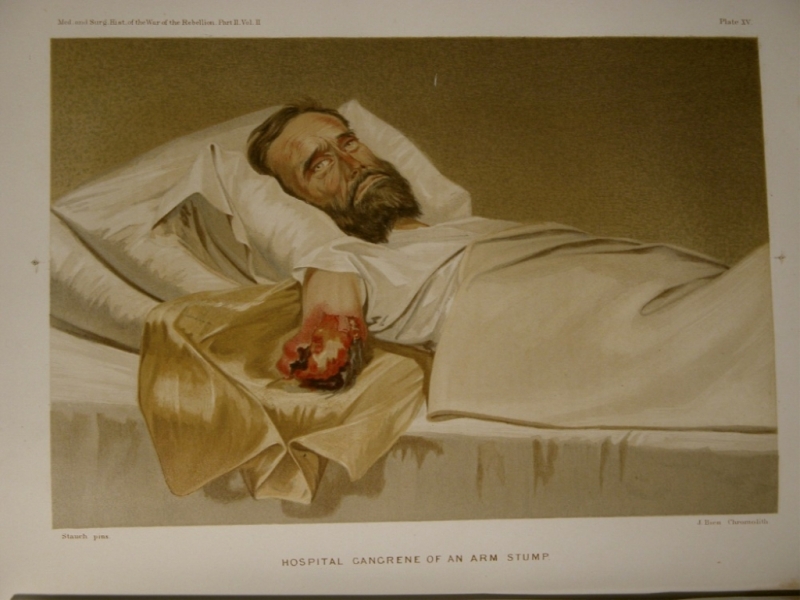 The Medical and Surgical History of the War of the Rebellion (1870–1888)
Private Milton E. Wallen, age 41, of the 1st Kentucky Cavalry was hospitalized Aug. 3, 1863 and while a prisoner in Richmond, was shot by guards. He developed “hospital gangrene,” and required an amputation on Aug. 24.
, The Medical and Surgical History of the War of the Rebellion (1870–1888)
Cpt. “S” of the 29th New York volunteers was wounded by a musket ball on May 2, 1863 at Chancellorsville. With his lung collapsed, he walked 1 1/2 miles to a field hospital where physicians unsuccessfully attempted to reduce the hernea, which contained lung and “some portion of the alimentary canal.” The following day, hostilities forced Cpt S to be evacuated and he subsequently had to walk another 1 1/2 miles. The musket ball passed in his stool on May 7th, and the wound, which contained lung and stomach, eventually granulated in.
, The Medical and Surgical History of the War of the Rebellion (1870–1888)
Private Charles Betts of the 26th New Jersey Volunteers was wounded by a three ounce grapeshot in 1863 as he charged Fredericksburg. At one point, his aortic arch was outwardly visible, though Betts eventually recovered.
, ambulance train at Harewood Hospital, Washington,DC, ca. 1863
Jonathan Letterman, while medical director of the Army of the Potomac, developed the Letterman Ambulance Plan in which the ambulances of a division moved together with two stretcher-bearers and one driver per ambulance to move wounded from the field to dressing stations, and then on to the field hospital. This plan was implemented in August 1862 when McClellan issued General Orders No. 147 creating the Ambulance Corps for the Army of the Potomac.
, color print by Kurz and Allison of Chicago (1888) showing Grant “triumphantly” advancing on Lee at Cold Harbor, Virginia
The Battle of Cold Harbor was a devistating defeat for Grant and the North with about 7,000 soldiers slaughtered in the first 20 minutes of an ill-fated charge of Southern embankments. By reviewing this one battle in detail, one can get an understanding of trauma surgery during the latter part of the nineteenth century.
, depiction of the Battle of Cold Harbor by Currier and Ives, 1864
, Burial Party
This is one of the most famous images of the Civil War. John Reekie took this daguerreotype about a year after the Battle of Cold Harbor, Virginia (June 1864) when the dead, who had been hastily buried after the battle were dug up to be sent home to a proper resting place.
, skull of a Union soldier with Minie ball lodged under the right orbit, Cold Harbor, June 1864
, Diary kept by Sgt. Joseph Hume of Massachusetts, expired June 3, 1964
This diary was kept by Sgt. Joseph Hume of Massachusetts, killed on the bloodiest day of the battle on June 3, 1864. He was a twenty-year-old mill hand who was born in Ashburnham, Massachusetts, and entered the “A Company”—MA 36th infantry—as a private on July 28, 1862. Hume was promoted to sergeant major as he traveled south to fight at the Battle of Cold Harbor. A compatriot completed his diary on June 3 with the words, “Joseph received his death wound,” and the following day “Died in consequence of the above.” The diary was apparently on Hume’s person at the time of his death in light of the bloody stain in the corner.
, wedding ring recovered at the battlefield of Cold Horbor
, letter from Merari Bunajah Stevens
Merari was an eighteen year old farmer who participated in the fateful charge by Union forces at Cold Harbor. In a moving letter, he recounted the death of his father in his arms the following morning after he had removed the bullet from his side.
, Dr. Merari Stevens' letter
Dear friend Ezra, I take pen in hand to let you know that I yet live. We are camped near Petersburg and we are havng tolerable good times now. However, that was not the case last summer during the "killing season." We left Baltimore on May 15th...then we went on to Coal (sic) Harbor getting ready for the grand assault on the 3rd. The rebs had all the advantages of position and they were all well protected by breastworks and rifle pits. When the order was given we charged across the open plain into a hail storm of rebel balls and shells. Men were struck down as if by a great sythe like grass in haying time, and it was here that Father was struck...The bullet exited near the right hip...and then with my bowie knife took the ball out...Then I helped carry Father off the field and I stayed with him until he died...Father must have suffered greatly before he died..and he was very brave and calm. Father said that he was prepared to die and that he had done his duty...He bade me farewell and then died in my arms...So much blood shed on both sides so as to be beyond description...If we could only live in peace with our Southern brothers...
, Dr. Merari Bunajah Stevens and his five sons
Merari subsequently became a surgeon in Ohio, and two of his sons became physicians.
,