One of the most important discoveries in the history of medicine was that of the obstetric forceps, and some have called the forceps “the most valuable of all surgical instruments.” Unfortunately, however, the Chamberlen family kept the discovery a secret for several generations, thus depriving millions the use of this life-saving device. 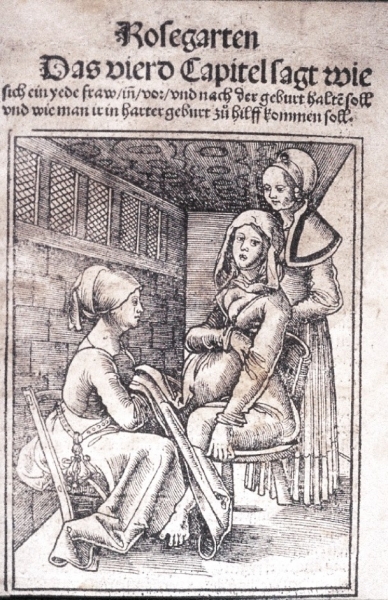 A Rose Garden for Expectant Women and Midwives (1513) by Eucharius Rösslin
Physicians were male prior to 1700, and were either reluctant or prohibited by law to aid in delivery. Midwives stepped in to help until the specialty of obstetrics came into being in the eighteenth century.
, 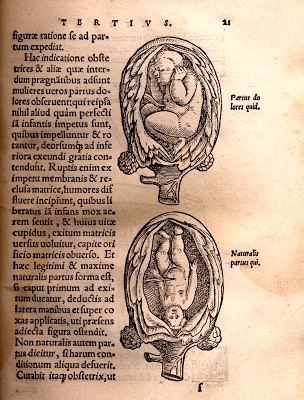 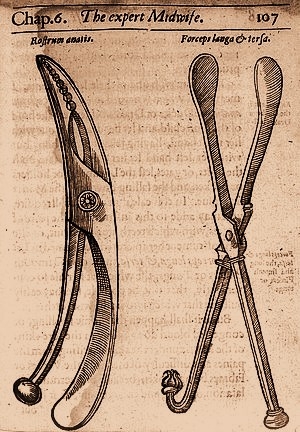 Obstetric Forceps (right)
Rueff designed and illustrated the forceps to the right in his seventeenth century book. It remains unclear whether these forceps were to be used to deliver a post mortem fetus or a live child, or both.
, 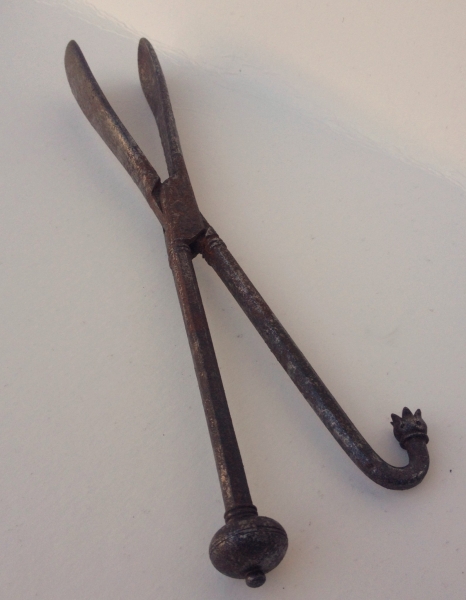 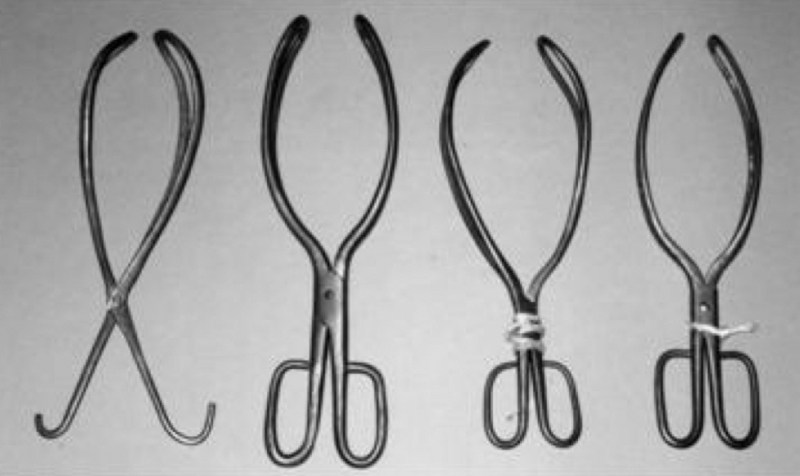 Original Chamberlen Forceps (late 17th century)
Peter (the elder) Chamberlen and later family members regrettably hid his extremely important discovery from the medical profession and from the public. Chamberlen's original set of forceps was discovered over a century later hidden under the floorboards in the attic of his previous home, Woodham Mortimer Hall in Essex
, 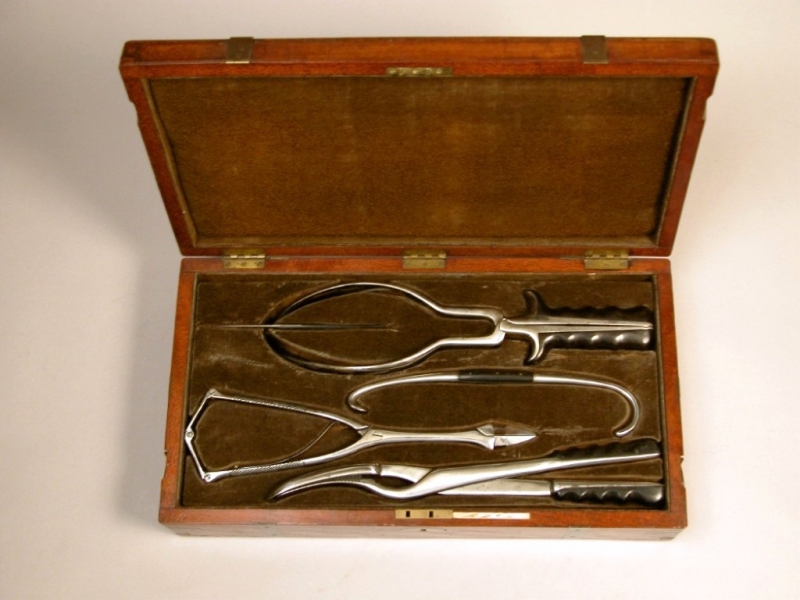 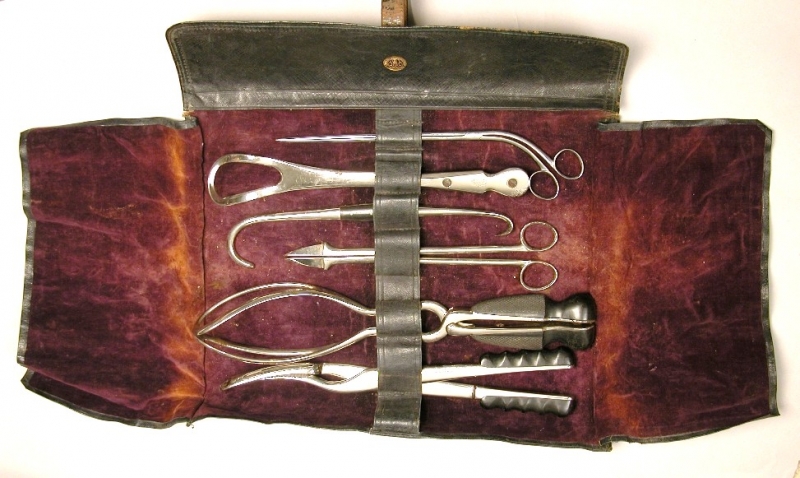 folding obstetrics set by Maw, Son & Thompson
This set had all the necessary instruments and would accompany the physician to the home for delivery.
, 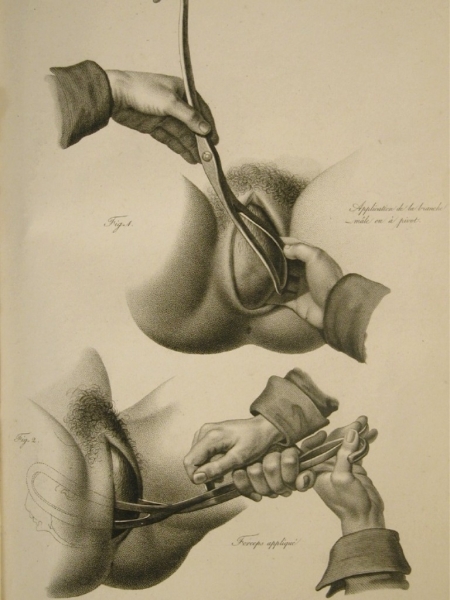 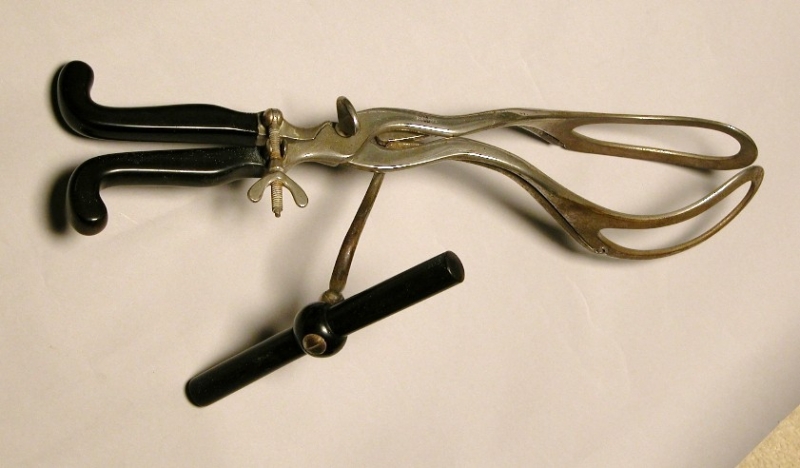 Tarnier traction forceps (ca. 1870) by Tiemann
This instrument and the ones that follow aided the obstetrician in prolonged labor.
,

a vectis ca. 1870 to aid in delivery
a small instrument that was available to most obstetricians in the nineteeth century to aid in dielvery
, 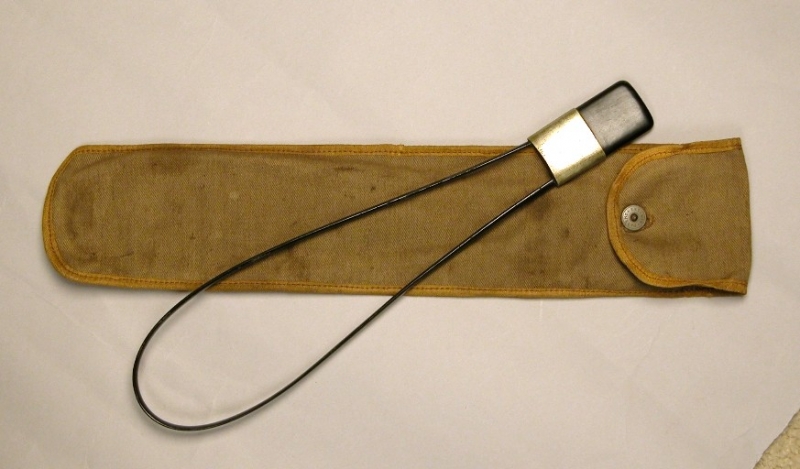 a filet by Weiss, mid nineteenth century
an instrument for creating traction in order to aid in delivery
, 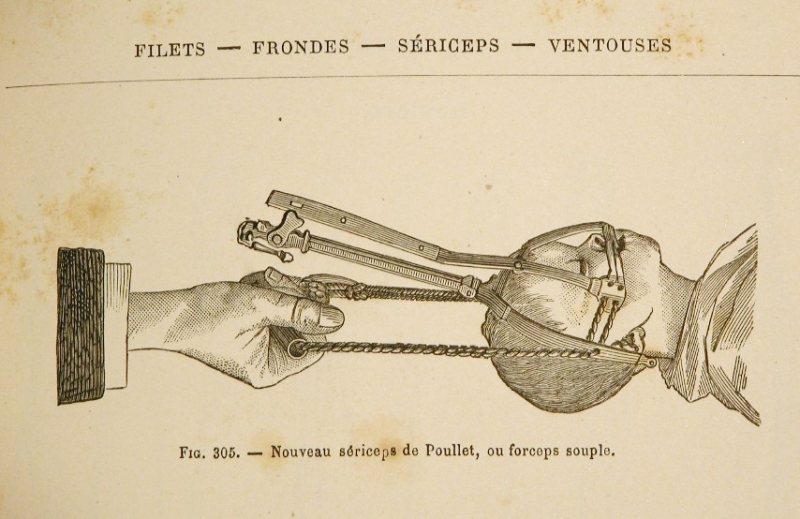 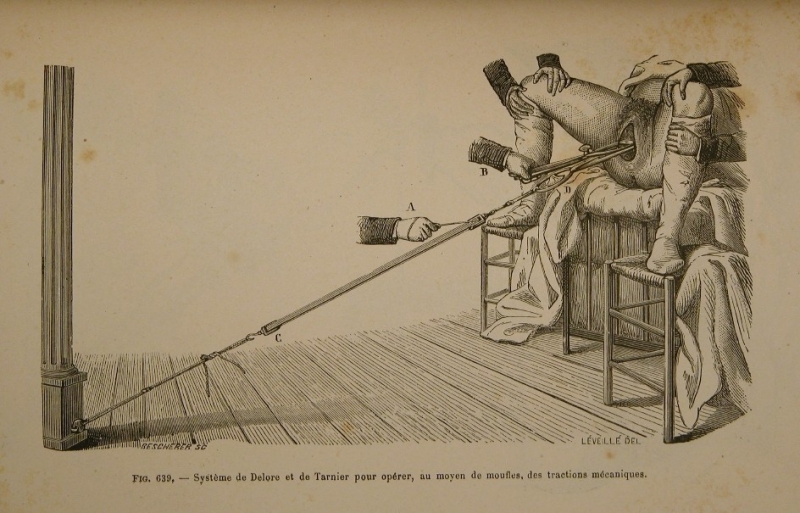 Histoire des Accouchements by GJ Witkowski
This traction pulley could be added to the Tarnier forceps for very difficult deliveries.
, 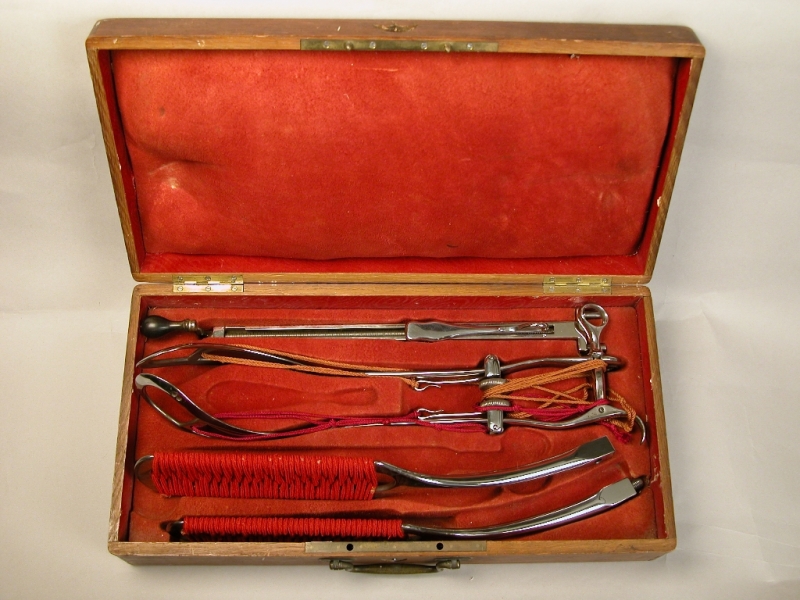 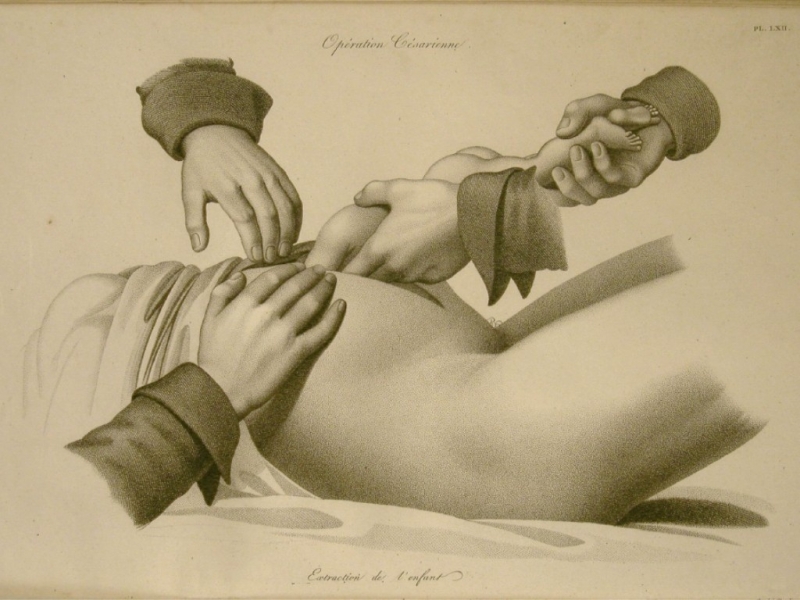 Nouvelles Démonstrations D’Accouchemens (1822) by J.P. Maygrier
It was not until 1500 that the first documented cesarean section took place, though in legend the Greek god Apollo performed the first cesarean section when he delivered his son Asklepios, the eventual god of medicine. Images of this procedure appeared in many ancient cultures, including those of the Egyptians, Chinese, and Greeks. The term has been attributed to the birth of Julius Caesar though this origin is likely erroneous since Caesar’s mother, Aurelia, was apparently alive during her son’s invasion of Great Britain years later and at that time the cesarean section was reserved for the rescue of the child after the death of the mother.
, 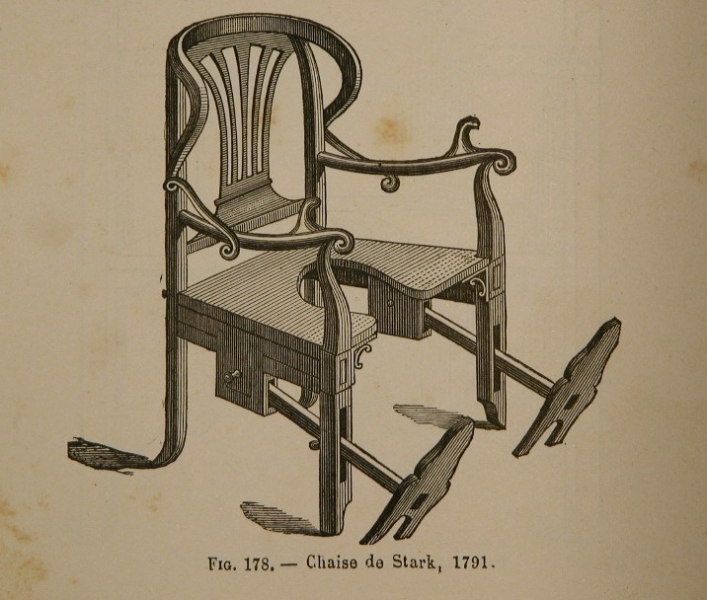 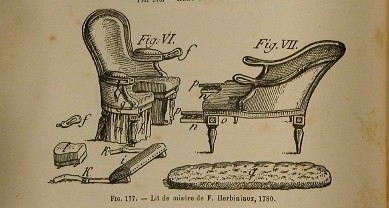 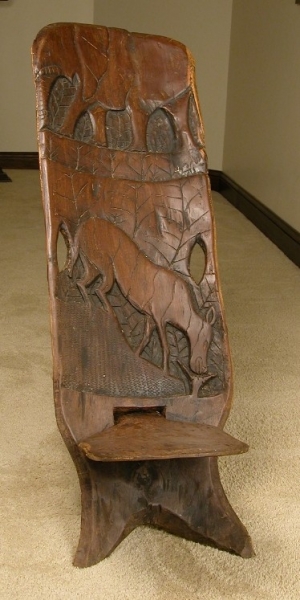